Over the past two months, you’ve received my letters “The Epistle of Saint Helena: A Guide To Understanding Why The World Will End In 2022, Or Maybe Not” (http://www.whatdoesitmean.com/index2746.htm) and “The Epistle of Saint Helena: The Hidden Map Of Truth” (http://www.whatdoesitmean.com/index2772.htm) – that I’ve likened to being the first two chapters of much larger body of material I’m working to complete this year based on the 1923 writings of Novice Kathleen Helen in her research of Saint Helena (https://en.wikipedia.org/wiki/Helena_(empress), 250-330 AD) – who was the mother of Constantine the Great (https://en.wikipedia.org/wiki/Constantine_the_Great, 272-337 AD), whom he appointed as Augusta Imperatrix, and gave unlimited access to the imperial Roman treasury in order for her to locate the relics of Judeo-Christian tradition – and are a must read for those you who haven’t already, so this next chapter can be fully understood. 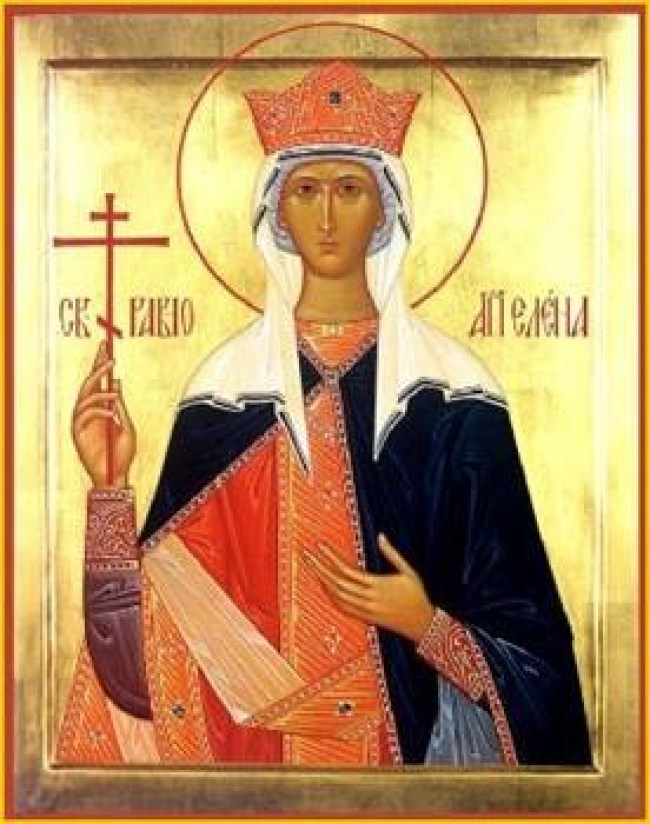 Saint Helena (foto What does it mean)

Of considerable puzzlement to Novice Kathleen Helen in her compiling a list of the ancient Christian artifacts and writings being accumulated throughout the Holy Land by Saint Helena were those having to do with the Aldebaran (https://en.wikipedia.org/wiki/Aldebaran) solar system – a giant red star with its associated planets located about 65 light years from our Sun, and best known today as the “Fiery Eye of the Bull” (https://earthsky.org/brightest-stars/aldebaran-is-taurus-bloodshot-eye) in the constellation Taurus.

History has well documented that the Eastern Roman Empire ruled over by Saint Helena’s son Constantine was an astrological-centric culture whose main focus of interest and studies centered on equinoxes and eclipses, the shape of the Earth and models for the Sun, the Moon and the five (known) planets (https://classicalwisdom.com/science/astronomy/eastern-roman-empires-legacy-astronomy/) – but after whose adoption of Christianity in 321 A.D. (https://en.wikipedia.org/wiki/Constantine_the_Great_and_Christianity), along with discoveries being made by Saint Helena, saw them developing a great fear of the “Fiery Eye of the Bull” – most particularly due to an ancient “end of days” warning written about in the Book of Deuteronomy (https://en.wikipedia.org/wiki/Book_of_Deuteronomy, the fifth book of the Christian Old Testament and of the Jewish Torah) that, in Chapter 33, Verse 17, says:

“A firstborn bull – he has majesty, and his horns are the horns of a wild ox; with them he shall gore the peoples, all of them, to the ends of the earth; they are the ten thousands of Ephraim, and they are the thousands of Manasseh.”
https://www.openbible.info/topics/bull The Heraldic Emblems of Manasseh (Joseph’s son, foto What does it mean) The Heraldic Emblems of Ephaim (Joseph’s son, foto What does it mean) 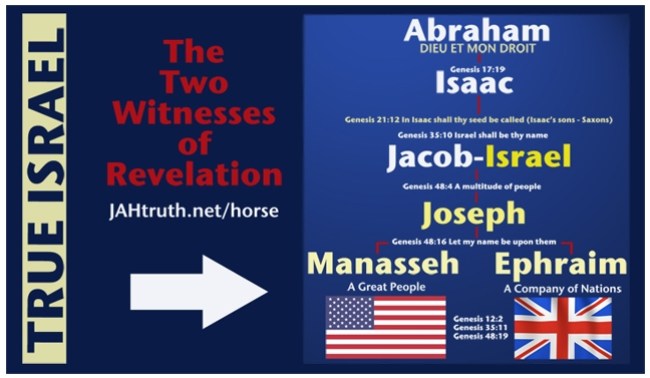 The Two Witnesses of Revelation (foto What does it mean)

In early June 1942, when Novice Kathleen Helen showed her Saint Helena epistle to General Eisenhower (while using her married name Kate Summersby, and whom Eisenhower kept by his side throughout World War II, http://www.whatdoesitmean.com/index2746.htm), aside from his being immediately given command of the entire Western war effort against Nazi Germany, he tasked both American and British intelligence services to “stop at all costs” the activities of Marija Oršić (http://1stmuse.com/maria_orsitsch/) – also known in the West today as Maria Orsitsch and Maria Orsic.

Since the ending of World War II, the entire Western world has attempted to obliterate Marija Oršić from history – and for good reason, because in knowing about her, people would know that upon this single woman’s shoulders, the entire history of our world was changed forever – and is why Professor-Doctor Michael Schetsche (https://www.soziologie.uni-freiburg.de/personen/mschetsche) and Professor-Doctor Andreas Anton (http://www.igpp.de/eks/andreas_anton.htm) at the University of Freiburg, in Germany, are warning humanity today about a possible catastrophe if Earth makes contact with an alien race (https://sputniknews.com/science/201902221072652286-signals-capitalist-aliens/).

What you should know about Marija Oršić is that in 1921, in the aftermath of World War I, she founded the Vril Society (https://www.gaia.com/article/maria-orsic-vril-ufos-nazi-germany-secrets), whose full name was “The All German Society for Metaphysics” (https://www.gaia.com/article/maria-orsic-vril-ufos-nazi-germany-secrets) – and who, in 1924, met with Rudolf Hess – who himself, in 1920, joined a little known political organization headed by Adolf Hitler called the National Socialist German Workers’ Party (Nazi Party) – by 1941 had risen to be Hitler’s second in command – but who mysteriously then flew by himself to Britain to give “world altering” information about what the Germans were really doing – for which he was kept in solitary confinement in a Berlin, Germany prison built just for him where, for nearly 50 years, he was not able to talk to anyone but his Western and Soviet captors up to the day he died on 17 August 1987.

Eckert was the founder of the German Workers Party that evolved into the Nazi Party, and to establish contact with him, Sebottendorf and other Thulists joined hands around a black-draped table – and that Rudolf Hess found unnerving to watch when Marija Oršić’s eyeballs rolled back and showing only whites, with her then slumping backward in her chair, mouth agape —but that Sebottendorf smiled in satisfaction of as the voice of Eckart started coming out of Marija Oršić – and was when Eckart announced that he was obliged to let someone else’s voice come through, with an important message.

From the first person accounts of this “message” (http://1stmuse.com/maria_orsitsch/), it is said that a weird voice identified itself as the Sumi, dwellers of a distant world, which orbits the star Aldebaran in the constellation you call Taurus the Bull – that caused Rudolf Hess and the others to blink at each other in surprise – and according to the voice, the Sumi were a humanoid race who had briefly colonized Earth 500 million years ago – the ruins of which are the ancient Larsa, Shurrupak and Nippur in Iraq that had been built by them – with Sumi further revealing that those of them who survived the great flood of Ut – napishtim (the Deluge of Noah’s Ark) had become the ancestors of the Aryan race – all of whose revelations Sebottendorf remained skeptical of and asked for proof – and in response to, while Marija Oršić was still in a trance, then saw her scribbling several lines of queer looking marks which turned out to be ancient Sumerian characters, the language of the founders of the oldest Babylonian culture.

By 1927, Adolf Hitler had taken over full control of Marija Oršić and the Vril Society merging it with his Nazi Party – thus creating what we know today as “Nazi Occult Science” (https://www.disclose.tv/maria-orsic-vril-society-337756) – the most secretive, mysterious and feared artifact of was the “Die Glocke” (https://www.gaia.com/article/nazi-bell-ufo-technology) – meaning the bell, which was a space-going, UFO like saucer craft believed to be able transcend time and space — but as testified under oath during his war crimes trial in Soviet occupied Poland, saw SS Obergruppenfuhrer Jakob Sporrenberg (one of the highest commissioned Nazi SS ranks) saw him admitting that all of the scientists, engineers and technicians who had worked on the “Die Glocke” had been executed (https://www.gaia.com/article/nazi-bell-ufo-technology) – but not Marija Oršić – who is still whispered about as being “The Goddess of the Devil” (https://www.disclose.tv/maria-orsic-vril-society-337756), but whose eventual fate of is still unknown to this very day. 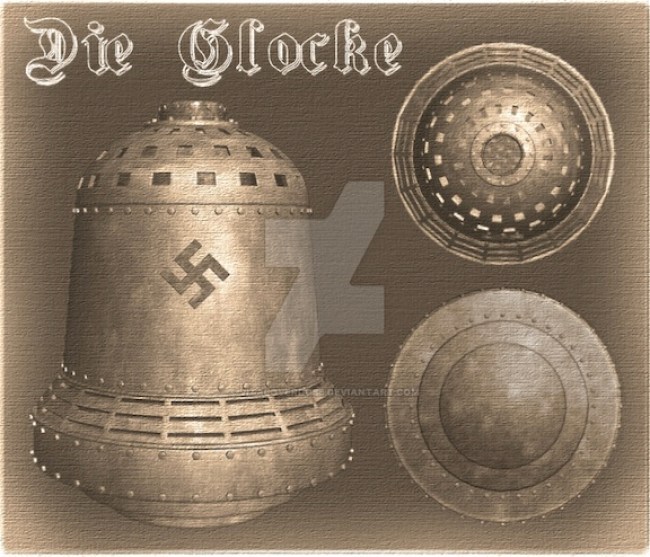 Die Glocke (foto What does it mean)

Last known photograph of Marija Oršić circa 1944 (right) and one of her Sumi “inspired” Nazi occult aircraft (left, foto What does it mean)

By your understanding this chapter of The Epistle of Saint Helena, and the two that preceded it, I’ve (hopefully) laid the groundwork for your being able to absorb the honestly mind altering next chapters to come – that will actually begin to shift you back into the morphogenetic field (https://www.sciencealert.com/neuroscientists-say-they-ve-found-an-entirely-new-form-of-neural-communication) you truly belong in a fearful consequence to your rulers whose own scientists have had to admit your “mind” isn’t confined to your brain, or even your body (https://qz.com/866352/scientists-say-your-mind-isnt-confined-to-your-brain-or-even-your-body/) – who’ve just identified a previously unknown form of neural communication that self-propagates across brain tissue, and can leap wirelessly from neurons in one section of brain tissue to another – even if they’ve been surgically severed (https://www.sciencealert.com/neuroscientists-say-they-ve-found-an-entirely-new-form-of-neural-communication) – and one of whose top neuroscientists, Doctor Julia Mossbridge, has just released her scientific findings into how powerful your mind, dreams and thoughts really, that are that are so profound, they will “send shivers down your spine” (https://www.dailymail.co.uk/femail/article-6726143/Scientist-says-future-dreams.html).

On this journey you’re following us on, though, neither my Sisters nor myself can complete it without your kind and generous support – and is why, once gain, I humbly ask you to give us what you can today – an appeal we make to you in the hope you’re awakening to the truth and knowing the value in keeping it flowing to you – but as you well know, too, are true things greatly opposed by those wishing to keep you ignorant and under their total control – but whose old world of lies and deceit to do so are crumbling into the true deceitful ashes of lies they really are, and always have been.

Therefore, as I end now, and before you turn away from this appeal using the hardened mind and heart this old world has given you – I invite you to remember the new world to come words of our Lord that instructs us all by reminding us “A gift opens the way and ushers the giver into the presence of the great.” (https://dailyverses.net/giving) –  and whose test of the truth of these words you’re now being invited to partake in.

Rachel Corbett - ‘It Was a Question of ‘How Far Will They Go?”: Former Art Students Remember How Jeff… http://robscholtemuseum.nl/rachel-corbett-it-was-a-question-of-how-far-will-they-go-former-art-students-remember-how-jeffrey-epstein-tested-their-boundaries/ via @rsmuseum