With laws being passed by the Democrats (i.e. Deep State) which criminalises homelessness, the people, at that time (6 weeks ago) in the inner city seemed to be in jeopardy. Why would the Democratically controlled LA County cities now seemingly reverse themselves and offer free housing to all homeless people? This is a reversal of policies, on this topic, which were implemented only a mere 6 weeks ago. Or, am I looking at this from the perspective? Are we looking at the introduction of FEMA camps with a population that will not complain until its too late? Will the homeless be drawn in by the promise of “3 hots and a cot”? Will the public be fooled because of the apparent humanitarian nature of the practice?

What is being cast as a humanitarian development on one hand, is actually very disturbing when one examines the flip-flop of LA County and the subject of homelessness and how they should be handled. Upon further examination, this is a very disturbing development on a number of fronts. First, if the governmental authority’s motives were pure, then why would they feel the need to first criminalise homelessness? Secondly, the funding of public housing for homelessness, implemented only 60 days after criminalising the behaviour, is a complete policy reversal, unless we look at this from another perspective.

If a behaviour is criminalised, this gives the ruling authority the right to incarcerate. Incarcerate to what? To jail, or a jail that is actually a FEMA camp? The globalists have presented us with evidence on how they have perfected the use incrementalism to “nudge” people to their will. Is handling of the homeless population the means to get people to accept FEMA camps as an idea that is actually good for people as it hides under the guise of “protecting people”, or a certain class of people? What does history teach us about this strategy of incrementalism and FEMA (i.e. concentration) camps? If the FEMA (i.e. concentration) camp mentality is the goal of globalists, housing homeless after criminalising the behaviour so the homeless have nowhere else to go, would be a very intelligent way to introduce the practice to America. As the idea of these indigent FEMA camps grow, the groups of people that can be added to the FEMA camp population can be incrementally increased and there would never be a public outcry because, after all, this is a humanitarian program. the homeless are being presented with “protective custody” and it is for their own good. It protects society by moving these people off of the street. As the reader will clearly see in later paragraphs, the term “protective custody” is right out of Nazi Germany and was used as the excuse to commence the march to the death camps.

I know that you are thinking that this is an interesting idea, there is some logic behind it, but has this ever been done before? Is there an historical precedent to this practice of establishing an ever-increasing practice of growing concentration camps? The answer is a resounding, YES! First, a simplistic example from American history demonstrates that any ruling authority with ulterior motives can and will abuse an entire group of people. 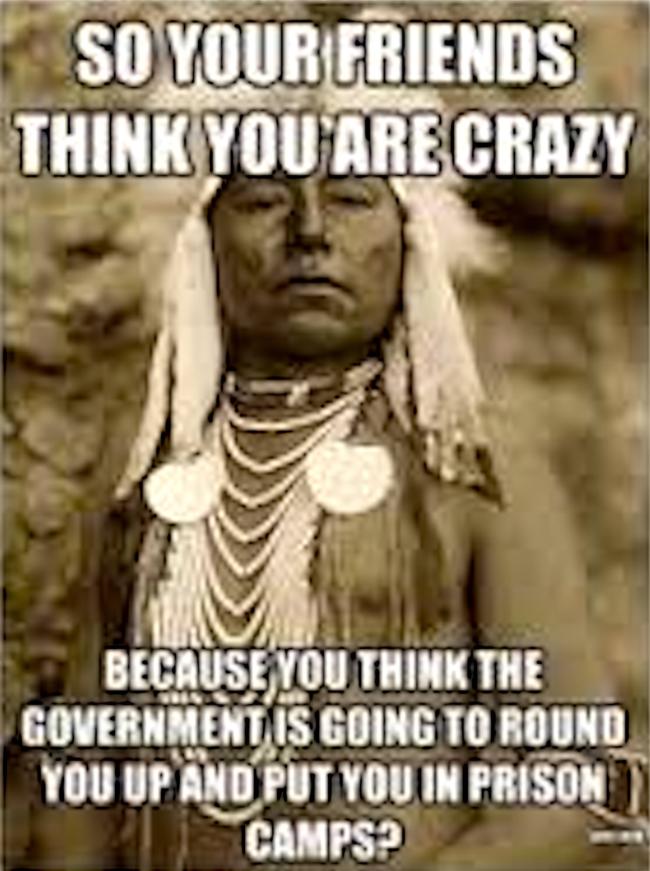 The historical precedent was was set in American history with the extreme abuse, theft of property, illegal confinement and murder of Native Americans. These “Reservations” were the first concentration camps in America. And of course, let’s not forget of 300 years of inhumane slavery in America.

Nazi Germany and the Notion of Protective Custody

From an historical account of the progressive and the incremental nature of the implementation of concentration camps, we are presented with how the Nazis introduced and carried the extermination of 6 million human beings:

German authorities under National Socialism established a variety of detention facilities to confine those whom they defined as political, ideological, or racial opponents of the regime. In time their extensive camp system came to include concentration camps, where persons were incarcerated without observation of the standard norms applying to arrest and custody; labor camps; prisoner of war camps; transit camps; and camps which served as killing centers, often called extermination camps or death camps…

In the beginning, the concentration camps were utilised as a type of PROTECTIVE CUSTODY. The parallels are obvious.

Certainly, one can argue that LA County’s move to provide shelter to homeless is a case of “PROTECTIVE CUSTODY” only weeks after criminalising homeless behaviour.

Another historical account presents us with the strategy on incrementally expanding the prison population after the death camps were started in Nazi Germany.

Most prisoners in the early concentration camps represented real or perceived political opponents of the regime. However, as time went on, the prisoner population expanded to include ideological and religious dissenters, such as Jehovah’s Witnesses (https://www.ushmm.org/wlc/en/article.php?ModuleId=10005394) and dissident members of the clergy. The prisoner population also expanded to include individuals whose behavior did not comply with existing social norms, such as homosexuals, the “work-shy,” vagrants, other so-called “asocials,” and Roma, who, to Nazi leaders, represented at once an alien racial and criminal element on German soil. Habitual criminals were also incarcerated in concentration camps beginning in the 1930s, often after they had served their legitimate sentences in prison…

If history is repeated on American soil, this is where the Christians need to become highly concerned. This statement is justified by the DHS establishment of the Clergy Response Teams in which pastors are secretly employed to spy on their congregation and then assist when certain populations have been systematically rounded up.

I have dedicated many articles to the probability of the emergence of concentration camps (i.e. FEMA camps) on American soil. However, since the 2016 Presidential campaign, I have attracted many new readers, listeners and viewers. Perhaps it is time to demonstrate just how close the implementation of concentration camps are in America.