The good guys are continuing to win the secret battle for the planet earth in a big way, multiple sources confirm. As things now stand, there will be a new wave of mass arrests in August, official government disclosure about 9/11 in September, and some sort of “major economic announcement in October,” Pentagon sources claim.

Behind the scenes, meetings involving the Knights of Malta, Russian FSB officials, Asian secret societies, and others are preparing the way for an economic announcement that could well be a genuine jubilee accompanied by a new financial system, according to sources involved in the negotiations. Since the negotiations are ongoing, the details have yet to be hammered out, but a general consensus does exist, the sources say.

The key may be U.S. President Donald Trump’s imminent takeover of the Supreme Court, which would pave the way for war crimes trials and the legal recognition of a new financial system when it convenes in October, Pentagon sources say.

On that front, the “battle rages, as Trump’s super-elite stopped Bush operative Brett Kavanaugh and may succeed in getting a woman or an Indian [Native American] nominated,” the sources say.

The situation has reached the point where The New York Times has actually called for “Godfather” tactics and armed rebellion because Trump and his backers were poised to take over control of the Supreme Court.
https://www.breitbart.com/big-journalism/2018/07/07/new-york-times-calls-godfather-tactics-stop-trumps-scotus-nominee/

Do not be surprised if military police soon occupy that treasonous paper’s offices. Since they have consistently, and criminally, suppressed the truth about the murder of 3,000 New Yorkers on September 11, 2001, such a move would be long overdue.

We also have former U.S. Defense Secretary (and traitor) Leon Panetta saying European leaders “are scared to death” that U.S. troops will be pulled out of Europe.
https://www.independent.co.uk/news/world/europe/trump-us-troops-europe-leaders-scared-eu-panetta-germany-uk-france-baltic-a8437111.html?utm_source=reddit.com

They should be scared to death, since they are mostly war criminals who would have already been jailed and possibly even executed if the U.S. military were not protecting them.

The corporate press is also now following this newsletter (remember, you read it here first) in reporting that NATO and the post-war system are in mortal danger. We have Bloomberg reporting that embattled German Chancellor Angela Merkel is resolved “to fight for the survival of post-World War II global institutions.”
http://www.bakersfield.com/ap/national/merkel-warns-of-worldwide-financial-crisis/article_2dff7b52-12a8-5a67-86b0-e4b9324607aa.html

We also have the Khazarian whore, court bard Bono warning hundreds of UN officials that the United Nations, the EU, NATO, and the Group of Seven are “under attack.”
https://www.yahoo.com/news/prime-minister-honors-87-irish-un-peacekeepers-died-175547438.html

They are under attack, because their leadership has been plotting to murder 90% of humanity, and their incompetence is leading to the largest destruction of life on the planet since the dinosaurs were wiped out 65 million years ago.

Of course, as usual the Khazarian mafia is trying to murder, lie, and bribe in order to stay in power.

The latest casualty was Chinese HNA Group chairman Wang Jian, who news reports claim “fell to his death after posing for a photo in France,” last week.
https://www.rt.com/news/431745-hna-chairman-dead-france-wang-jian/

Mossad sources say it was “no accident” and that he was “taken out, as he was about to testify in a closed hearing regarding Deutsche Bank’s yet-to-be-revealed improprieties, possibly enough to have finished off the bank.  It is known in certain circles that Hilton Hotels is a global laundry service for dark money.  Wang’s family was given a gag order.”

It’s likely that the death of Wang is connected to the execution in Japan last week of Tokyo subway Sarin gas attack mastermind and Aum cult guru Shoko Asahara and six of his top lieutenants, according to Japanese right-wing sources close to the Emperor.

The Japanese slave government of Shinzo Abe is terrified that the truths about the subway gas attack, as well as the Fukushima nuclear and tsunami mass-murder event, are going to be made public soon now that North Korea is cutting off its connections with the Khazarian mob, the sources say.  Executing the Aum leadership prevents them from being questioned by third parties about what was really going on.

The connection with Deutsche Bank would likely have to do with the laundering of drug money.  Several Japanese journalists were murdered after reporting that the Aum Shinrikyo subway gas cult was selling North Korean amphetamines to Japanese gangsters, as confirmed by sources in the Yamaguchi Gumi syndicate.  Furthermore, all testimony about the Aum illegal drug business was scrapped from the decades-long Aum-related trials.

This writer was once approached by a self-described former “Aum sex slave,” who said the top hierarchy of the gas attack cult were North Korean gangsters, and that above them were “Al Qaeda-type Jews.”  Aum was a front for the Unification Church of Reverend Moon that had long worked in the international narcotics and weapons business with the Nazis under Fuhrer Bush, the right-wing sources say.
Also, on the day of the subway gas attack on March 20, 1995, balloons from North Korea carrying an “unidentified liquid” landed all over Japan, bearing the message that this attack was “revenge on the 100th anniversary of the murder of Empress Myung Sung.”  Myung Sung wanted close relations with Russia in order to counter Japanese attempts to colonize Korea, so the Japanese murdered her and proceeded to colonize Korea.  It is also worth noting that the Aum cult had tens of thousands of Russian followers.

Overall, the situation is so complicated and involves so many people, many still in office, that a truth commission may be the only way for the world public to find out what has really been going on.

On that front, the Koreans and Japanese should note that newly elected Mexican President López Obrador is contemplating truth commissions to resolve the drug war in that country.  Legalizing and regulating drugs while offering amnesty to the drug lords would deal a major blow to the Bush drug mafia.  Mexico is now the latest domino to fall as the Khazarian mob loses control of country after country.

The next domino to fall could well be Brazil.  There, the kleptocratic government of President Michel Temer is tottering under the weight of a 10-day trucker strike that is being supported now by oil workers.  The army, for its part, has failed to follow orders to break up the strike.  Anger at the looting of Brazil on behalf of foreign masters (misleadingly labeled as “privatization”) is the main reason for this strike.

“The fight is on to beat back the right, reverse economic liberalization, and open the door to the possibility of a different kind of society,” was how Alistair Farrow of the Socialist Worker Newsdescribed the situation.

If the Brazilian crime regime falls, the remaining top Khazarian resistance would be the German regime of Angela Merkel, the French slave regime of President Emmanuel Macron, the slave regime of Shinzo Abe in Japan, and of course the arch-criminal and Nazi Benjamin Netanyahu of Israel.  Once they are taken down, it will be game over.

On this front, we need to remind readers that during his years as a businessman, every time Donald Trump went bankrupt, it was the Rothschilds who bailed him out.  Last week they had a Mossad operative send this writer the following message:  “Tell your friend that he is 100% spot on with his analogy pertaining to Trump and ‘The Family.’  They have been backing him not only financially but also opening difficult doors, enabling him to mingle with the elites since the Roy Cohn days.  The Mossad operatives are not all evil.  There are those inside who are maneuvering events in Trump’s favor and are assisting him in draining the swamp.”

They also sent the following photograph showing Trump in Tehran, Iran in 1979, where he was planning to open a casino before the Iranian revolution disrupted his plans. 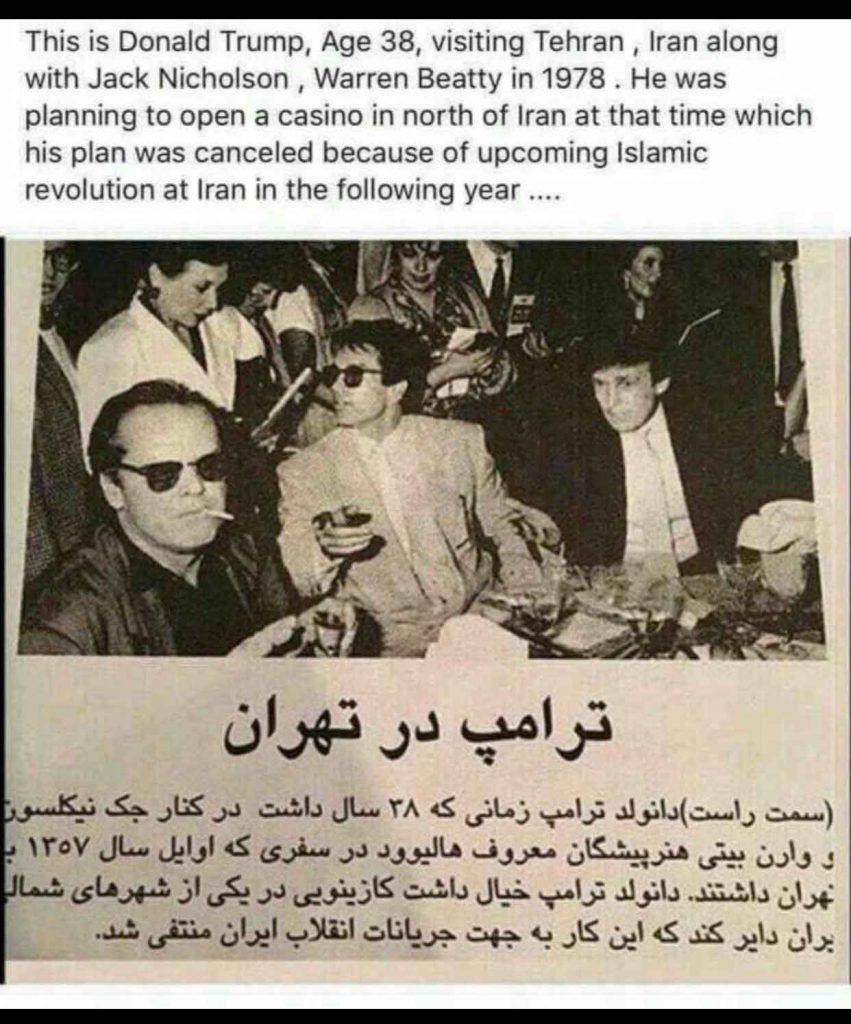 What this means is that while the Khazarian oligarchy has been divided between Nazis (“war on terror” plus drug money) and the global-warmers (carbon-trading fraud), it appears a third “drain the swamp” faction is emerging.  We’ll have to wait and see if they are really “the good guys.”  Their actions will tell.

As things now stand, according to Pentagon sources, “The asset-backed quantum financial system is ready but awaits the Trump-Putin summit, the global currency reset, mass arrests, and geopolitical resolutions.”

The sources are also saying the quarantine on the planet earth may soon be lifted and that “Trump’s space force may have a space guard to police civilian spacefaring.”  It sounds great, but only believe it when you can buy a ticket to another planet at your local travel agency.

On a final unrelated note, the following news item about spiders flying “thousands of miles using electricity” got our attention.

Years ago, a Russian researcher told me they had discovered that insects used anti-gravity.  That’s why bumblebees can fly, even though current aerodynamic theory says they cannot.  If insects can use anti-gravity, then we should be able to do so, too.  Again, though, believe it when you can buy a flying carpet or anti-gravity scooter at your local shop.

In conclusion, all we can say for sure is that humanity is entering uncharted territory.