Returning to the Corona Virus epidemic and the way governments are reacting to it, Thierry Meyssan stresses that the authoritarian decisions of Italy and France have NO medical justification. They contradict the observations of the best infectiologists and the instructions of the World Health Organization. 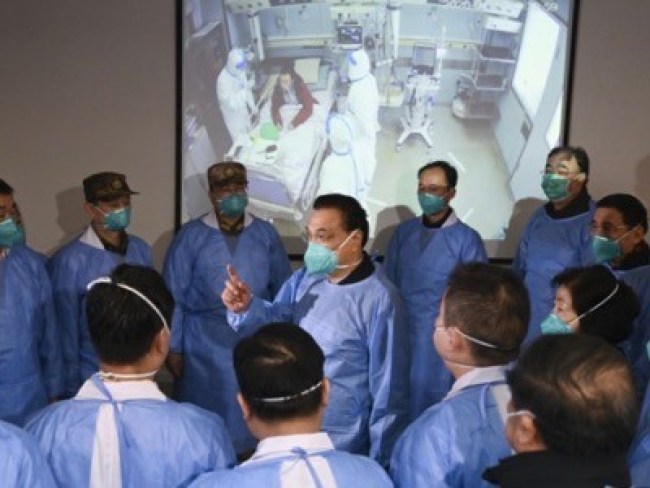 The Chinese Prime Minister, Li Keqiang, came to lead the operations in Wuhan and restore the “celestial mandate“ on January 27, 2020

This epidemic is not statistically significant. It kills very few people, although those it does kill experience terrible respiratory distress.

Since ancient times, in Chinese culture, Heaven has given a mandate to the Emperor to govern his subjects [1]. When he withdraws it, a disaster strikes the country: epidemic, earthquake, etc. Although we are in modern times, President XI felt threatened by the mismanagement of the Hubei regional government. The Council of State therefore took matters into its own hands. It forced the population of Hubei’s capital, Wuhan, to remain confined to their homes. Within days, it built hospitals; sent teams to each house to take the temperature of each inhabitant; took all potentially infected people to hospitals for testing; treated those infected with chloroquine phosphate and sent others home; and treated the critically ill with recombinant interferon Alfa 2B (IFNrec) for resuscitation. This vast operation had no public health necessity, other than to prove that the Chinese Communist Party still has the heavenly mandate. 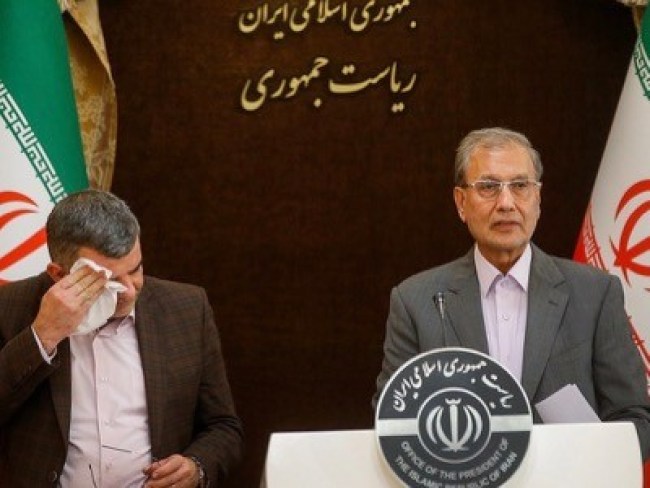 The epidemic spreads from China to Iran in mid February 2020. These two countries have been closely linked since ancient times. They share many common cultural elements. However, the Iranian population is the World’s most lung weakest. Almost all men over the age of sixty suffer from the after effects of the US combat gases used by the Iraqi Army during the First Gulf War (1980 – 1988), as did the Germans and the French after the  World War I. Any traveller to Iran has been struck by the number of serious lung ailments. When air pollution in Tehran increased beyond what they could bear, schools and government offices were closed and half of the families moved to the countryside with their grandparents. This has been happening several times a year for thirty five years and seems normal. The government and parliament are almost exclusively composed of veterans of the Iraq – Iran War, that is, people who are extremely fragile in relation to the Corona Virus. So when these groups were infected, many personalities developed the disease.

In view of the US sanctions, no Western bank covers the transport of medicines. Iran found itself unable to treat the infected and care for the sick until the UAE broke the embargo and sent two planes of medical equipment. People who would not suffer in the other country died from the first coughs due to the wounds in their lungs. As usual, the government closed schools. In addition, it deprogrammed several cultural and sporting events, but did not ban pilgrimages. Some areas have closed hotels to prevent the movement of sick people who can no longer find hospitals close to their homes. 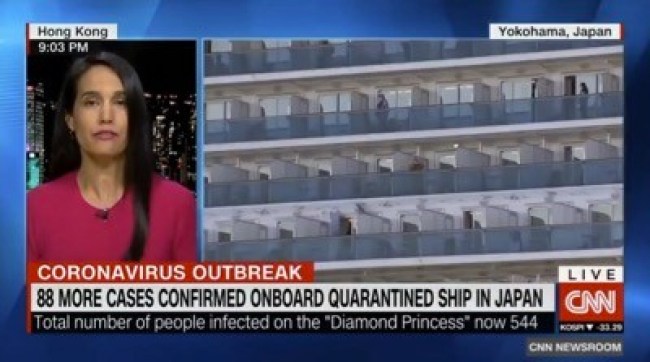 On February 4, 2020, a passenger on the US cruise ship Diamond Princess was diagnosed ill from the Corona Virus and ten passengers were infected. The Japanese Minister of Health, Katsunobu Kato, then imposed a two week quarantine on the ship in Yokohama in order to prevent the contagion from spreading to his country. In the end, out of the 3,711 people on board, the vast majority of whom are over 70 years old, there would be seven deaths.

The Diamond Princess is an Israeli American ship, owned by Micky Arison, brother of Shari Arison, the richest woman in Israel. The Arisons are turning this incident into a public relations operation. The Trump administration and several other countries airlifted their nationals to be quarantined at home. The international press devoted its headlines to this story. Referring to the Spanish flu epidemic of 1918 – 1919, it asserts that the epidemic could spread throughout the World and potentially threaten the human species with extinction [2]. This apocalyptic hypothesis, not based on any facts, will nevertheless become the Word of the Gospel.

We remember that in 1898, William Hearst and Joseph Pulitzer, in order to increase the sales of their daily newspapers, published false information in order to deliberately provoke a War between the United States and the Spanish colony of Cuba. This was the beginning of “yellow journalism” (publishing anything to make money). Today it is called “fake news“.

It is not known at this time whether tycoons deliberately spread panic about Corona Virus, making this vulgar epidemic seem like the “end of the World”. However, one distortion after another, governments have become involved. Of course, it is no longer a question of selling advertising screens by frightening people, but of dominating populations by exploiting this fear. 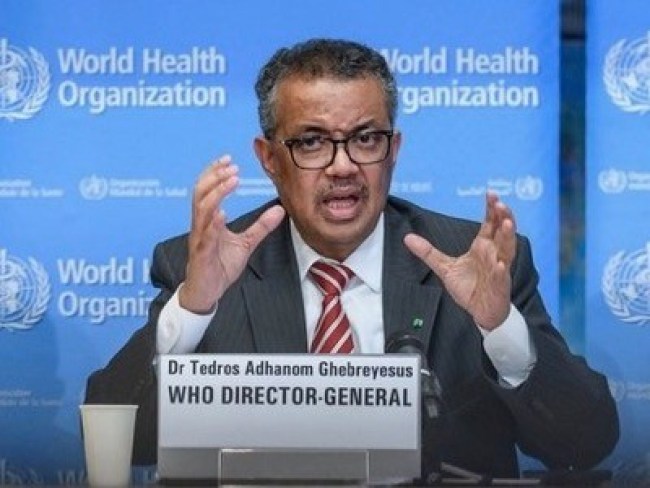 According to WHO Director, Dr. Tedros Adhanom Ghebreyesus, China and South Korea have set an example by generalising screening tests; a way of saying that the Italian and French methods are medical nonsense

The World Health Organization (WHO), which monitored the entire operation, noted the spread of the disease outside China. On February 11th and 12th, it organized a global forum on research and innovation on the epidemic in Geneva. At the forum, WHO Director General Dr Tedros Adhanom Ghebreyesus called in very measured terms for global collaboration [3].

In all of its messages, the WHO stressed : the low demographic impact of the epidemic; the futility of border closures; the ineffectiveness of wearing gloves, masks (except for health care workers) and certain “barrier measures” (for example, the distance of one metre only makes sense with infected people, but not with healthy people); the need to raise the level of hygiene, including hand washing, water disinfection and increased ventilation of confined spaces. Finally, use disposable tissues or, failing that, sneeze into your elbow.

However, the WHO is not a medical organization, but a United Nations agency dealing with health issues. Its officials, even if they are doctors, are also and above all politicians. It cannot therefore denounce the abuses of certain states. Furthermore, since the controversy over the H1N1 epidemic, the WHO must publicly justify all its recommendations. In 2009, it was accused of having let itself be swayed by the interests of big pharmaceutical companies and of having hastily sounded the alarm in a disproportionate manner [4]. This time it used the word “pandemic” only as a last resort, on March 12th, four months later.

At the Franco Italian summit in Naples on February 27, the French and Italian presidents, Giuseppe Conte and Emmanuel Macron, announced that they would react together to the pandemic.

Instrumentation in Italy and France

Modern propaganda should not be limited to the publication of false news as the United Kingdom did to convince its people to enter World War I, but should also be used in the same way as Germany did to convince its people to fight in the World War II. The recipe is always the same: to exert psychological pressure to induce subjects to voluntarily practice acts that they know are useless, but which will lead them to lie [5]. For example, in 2001, it was common knowledge that those accused of hijacking planes on 9/11 were not on the passenger boarding lists. Yet, in shock, most accepted without question the inane accusations made by FBI Director Robert Mueller against “19 hijackers“. Or, as is well known, President Saddam Hussein’s Iraq had only old Soviet Scud launchers with a range of up to 700 kilometers, but many Americans caulked the windows and doors of their homes to protect themselves from the deadly gases with which the evil dictator was going to attack America. This time, in the case of the Corona Virus, it is the voluntary confinement in the home that forces the person who accepts it to convince himself of the veracity of the threat.

In Italy, the first step was to isolate the contaminated regions according to the principle of quarantine, and then to isolate all citizens from each other, which follows a different logic.

According to the President of the Italian Council, Giuseppe Conte, and the French President, Emmanuel Macron, the aim of confining the entire population at home is not to overcome the epidemic, but to spread it out over time so that the sick do not arrive at the same time in hospitals and saturate them. In other words, it is not a medical measure, but an exclusively administrative one. It will not reduce the number of infected people, but will postpone it in time.

In order to convince the Italians and the French of the merits of their decision, Presidents Conte and Macron first enlisted the support of committees of scientific experts. While these committees had no objection to people staying at home, they had no objection to people going about their business. Then Chairs Conte and Macron made it mandatory to have an official form to go for a walk. This document on the letterheads of the respective ministries of the interior is drawn up on honour and is not subject to any checks or sanctions.

The two governments panic their populations by distributing unnecessary instructions disavowed by infectious diseases doctors: they encourage people to wear gloves and masks in all circumstances and to keep at least one metre away from any other human being.

Video from February 25, 2020 censored by the French Ministry of Health

The French “reference daily” (sic) Le Monde, Facebook France and the French Ministry of Health undertook to censor a video of Professor Didier Raoult, one of the World’s most renowned infectiologists, because by announcing the existence of a proven drug in China against Corona Virus, he highlighted the lack of a medical basis for the measures taken by President Macron [6].

Presentation by Professor Didier Raoult to the General Assembly of the University Hospitals of Marseille, March 16, 2020

It is too early to say what real goal the Conte and Macron governments are pursuing. The only thing that is certain is that it is not a question of fighting Corona Virus.

Cor Hendriks – The Macaws (27): The Herculean Tasks and the Magic Flight [cf ATU 313B] (2) http://robscholtemuseum.nl/cor-hendriks-the-macaws-27-the-herculean-tasks-and-the-magic-flight-cf-atu-313b-2/ via @rsmuseum