Paul Blanca (born 1954/1958), official name Paul Vlaswinkel, is a Dutch artist (art photographer) who had a breakthrough in the early 80’s of the last century with his confrontational violent self-portraits. The self-taught Blanca came into touch with the artworld when he met Eva Veldhoen, the daughter of the well-known Dutch painter Aat Veldhoen (1934). The acquaintance with this artistic environment was a real eye-opener for Blanca and shortly after he started photographing, first in color with a small screen camera but very soon after shooting in B&W using a Hasselblad camera (6 x 6 cm).

In 1980 he was introduced to the world-famous choreographer Hans van Manen (1932), who is a meritorious photographer himself and had a photo studio. Besides their mutual interest in photography, Van Manen also used Blanca in one of his dance choreographies called Posein which Blanca performed as a kick-boxer, he was a practitioner of this full-contact sport from the age of 16, surrounded by ballerina’s. Robert Mapplethorpe (1946-1989) who was a close friend of Van Manen was very impressed by Blanca’s self-portraits and later introduced him to New York’s high society (like Keith Haring, Willem de Kooning, Jasper Johns, Grace Jones…etc.) stating ‘Paul Blanca is my only competitor‘. The art collector Bill Katz says in Anthony Haden Guest’s True Colors – The Real Life of the Art World on Blanca: “(…) he reaches a kind of poetry few artists have“.

Most of Blanca’s self-portraits deal with strong emotions and violent themes like fear, sadness, pain, agression and sexuality exploring his inner demons. Diametrically against this harsh work, there are the sensitive and gentle pictures like the one called Mother and Son (Mapplethorpe’s favourite) depicting himself in a tender embrace with his mother, both fully naked, or the portrait holding his newborn son in the air called Father and Son.

In 1986 Blanca worked on a book called Timing (edition of 1000) which featured the upcoming Dutch artists of the eighties and his photographs were accompanied by poems of Koos Dalstra (1950). For his touching series Par la Pluie des Femmes (1989) he asked his female models to think of their most traumatic experiences. Together with Hans Gieles and Francis Boeske of the gallery Vous Etes Ici he produced the magnificent Sangre de Toro series in 1991 (see the paragraph ‘Sangre de Toro’ below). During this time Blanca also started as a research-journalist for the Amsterdam weekly, Nieuwe Revu and the newspaper Het Parool. He wrote about crack and again exploring his own boundaries he started to use it himself, resulting in an addiction. His article for Nieuwe Revu on weapons was the starting point of a downward spiral with him being a suspect in the assault on Rob Scholte in 1995 because of his “knowledge” of grenades. There was a long silence but in 2008 Blanca returned with a project called Mi Mattes in which he photographed gangmembers hanging around his studio.

Over the years there seems to be an increasing will-power in Blanca’s Self-portraits. In 1982 he photographed himself With Eels holding six living eels in his mouth (in his perception a disgusting animal), he looks into the world (at the viewer) with a resigned facial expression like he’s thinking “that’s how it really goes” with the scavengers fulfilling his wish to immortalization. 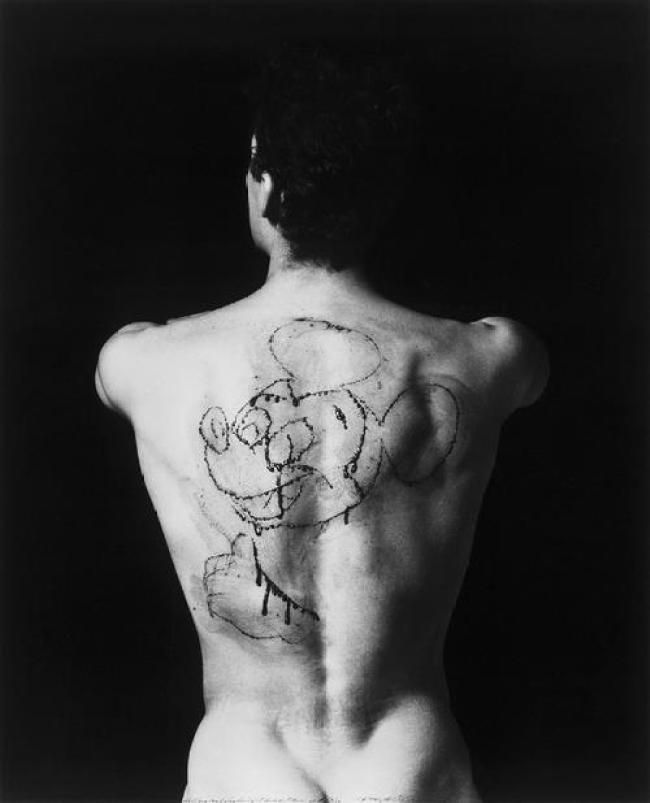 Blanca’s Selfportrait, Back with Mickey Mouse, features a large depiction on his back, inflicted with a razor blade by a befriended tattoo-artist, of Mickey Mouse with his thumbs up and a big smile, like he’s saying: “Keep up the good work“, is a sceptical statement because the mouse is crying.

In his Selfportrait Bull (1982) Blanca becomes, with his painted body disguished as a bull and his agressive facial expression, a disturbed figure. With his erected penis in his left hand and his right hand in a clenched grip, he’s looking for an exertion disarming the poetic image.

The excessive nature of Blanca’s self-portraits serve as a purification and therefore he has to subvert all boundaries and norms.

Blanca who had lived and worked in Spain for two years (in the early 90s), had, while there, become obsessed by bullfighting and kept up with all the ferias (local seasonal festivities) to take photographs. To challenge himself emotionally Blanca also participated in a bullfight, not with real bulls but with dangerous vacas (cows) of more than 800 pounds.

It intrigued him that when the corrida (bullfight) was at an end, the bull’s meat was served in restaurants but nothing was done with the blood – it is the fluid of life, after all. Blanca investigated whether blood could be used as silkscreen printing-ink. The treated blood was used for the portfolio, based on Blanca’s photos. Pressing the ink through the screen only once produced no more than a light pink colour, and in the end 35 ‘pulls‘ were needed to achieve the darkest tone in the pictures, creating a visible relief. The series forms a high point on the periphery of Blanca’s photographic work. For the affecionades (devotees) it is a must, for opponents of bullfighting it is also a monument of beauty.

Vinctum - These People Are SICK + PANIC in HOLLYWOOD + WUHAN + ADRENOCHROME: Those Who Know Cannot Sl… http://robscholtemuseum.nl/vinctum-these-people-are-sick-panic-in-hollywood-the-wuhan-connection-adrenochrome-those-who-know-cannot-sleep-why-are-celebrities-freaking-out-about-their-florists/ via @rsmuseum