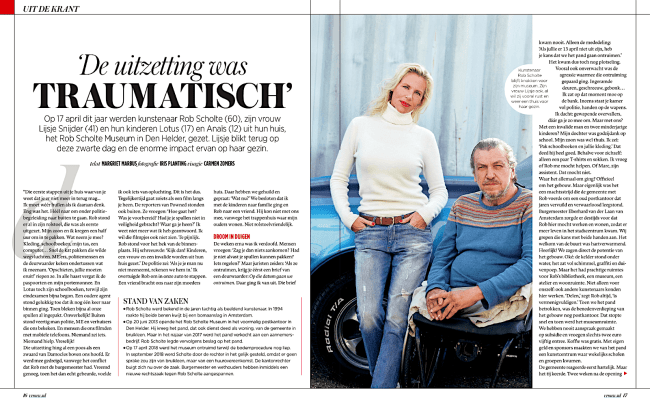 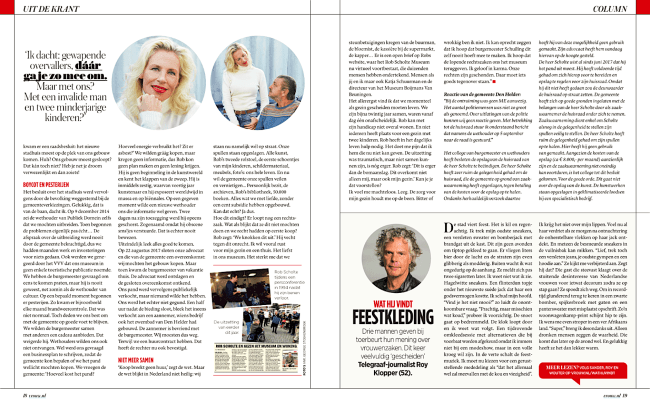 Rob Scholte was kicked out of the house: “Terrible!” | wife

“The first steps out of your house where you know you can not go back … I still have to cry when I think about it. It was scary. Having to go outside under police escort. Rob was already there in his wheelchair, which had been installed for the first time. My son and I have half an hour to pack. What do you take clothing, schoolbooks, my bag, a computer… quickly catch the cat who wanted to run away.

Conflict with the mayor

Outside, there were forty men police, me and the movers who looked at us. And the people who filmed us with mobile phones. Nobody said anything. Nobody helped. Terrible! The expulsion had been hanging over our heads for a moment like a sword of Damocles. He was threatened because of the conflict between Rob and the mayor.

Strangely, when that really happened, I was a little relieved. So that’s it. Rob was standing in front of the courtyard door. He shouted: “Look, then! Children, a woman and an invalid are being evicted from their home.” The police said, “If you do not take your husband now, we will count him in.” I convinced Rob

The following weeks, I was numb. People asked: “Did you see anything coming? Could not you have already packed your stuff? Organise something? But the lawyers said: “When they leave office, you will first receive a letter from a bailiff. We will leave on that date. I assumed that.

But this letter never arrived. Only the announcement: “If you are not out on April 13, you have a chance to leave the building.” What was it about? Officially the building. But in reality, the municipality and Rob had a power struggle for a former post office polluted and neglected for years.

The mayor of Amsterdam, Eberhard van der Laan , is certain that Rob can work and live here, so that downtown has more life. We seized this opportunity with both hands. The neighbourhood reception was comforting. Delicious!

When we moved into the building, the ground floor was still a post office. It stopped quickly and then became a museum space. We never asked for a grant and we only asked for an entrance fee of 2 euros 50. The coffee was free. With our own money and our sponsors, we have turned the building into an art center hosting schools and groups every week.

Works and investments for nothing

The municipality has reacted warmly. But the wind has turned. Two weeks after the inauguration, the city council made a decision: the new town hall was to be installed on the site of our building. Huh? Our building had to be demolished? This cannot be done? You just realised your dream, and then something like that.

The decision concerning the town hall was then voted down by the population during the municipal elections. “Fortunately, it’s off the track,” I thought. On December 9, 2014, Public Domain’s alderman said we were allowed to grow.

It’s then that the problems really started really… The agreement on enlargement has never been ratified by the municipality. So we did months of work and investment for nothing. We have also been ignored by the tourist board, which our museum has not mentioned in any tourist publication.

We asked the mayor to come talk, but he has never been, nor is the alderman of culture. How does it end? There is always a trial. What happens if it seems that they were not allowed to do it and that we had the right to make the first purchase? Rob says, “We are fighting for that.” He is fighting against this injustice. I especially want peace for my family and a home. Preferably in our museum.

It gives me comfort that we have received support from the neighbour, the florist, the shopkeeper, the supermarket, the hairdresser… There’s an open letter on Rob’s website, where the Rob Scholte Museum now exists, which thousands of people have signed. People like you and me, but also Katja Schuurman and the museum director Boijmans Van Beuningen. ”

“On the ouster, there was no ME. The number of police officers was not as important as expected, and we can not comment on the statements of the police. As for the furniture, I send the following message stating that in the name of the alderman he was sent to the council on September 5. – The mayor and the aldermen decided to put an end to the storage of Mr. Scholte’s household goods. Mr. Scholte has had ample opportunity to recover the furniture that the municipality has stored on the agency’s basis, against payment of storage fees. Given that storage costs (around EUR 8.000 per month) are considerable and that business perception can not last indefinitely, the Council has taken this decision. For the record. It is not a question of stocking art. The works of art are stored in air-conditioned hangars in a specialised company.”

Read the full article this weekend in VROUW magazine (every Saturday at De Telegraaf): https://www.telegraaf.nl/nieuws/2757785/gezin-rob-scholte-werd-uit-huis-gezet-vreselijk.

Frank Parlato - The Lost Women of NXIVM http://robscholtemuseum.nl/frank-parlato-the-lost-women-of-nxivm/ via @rsmuseum