This is the letter sent to Dr Tedros of the World Health Organization. It is self explanatory! 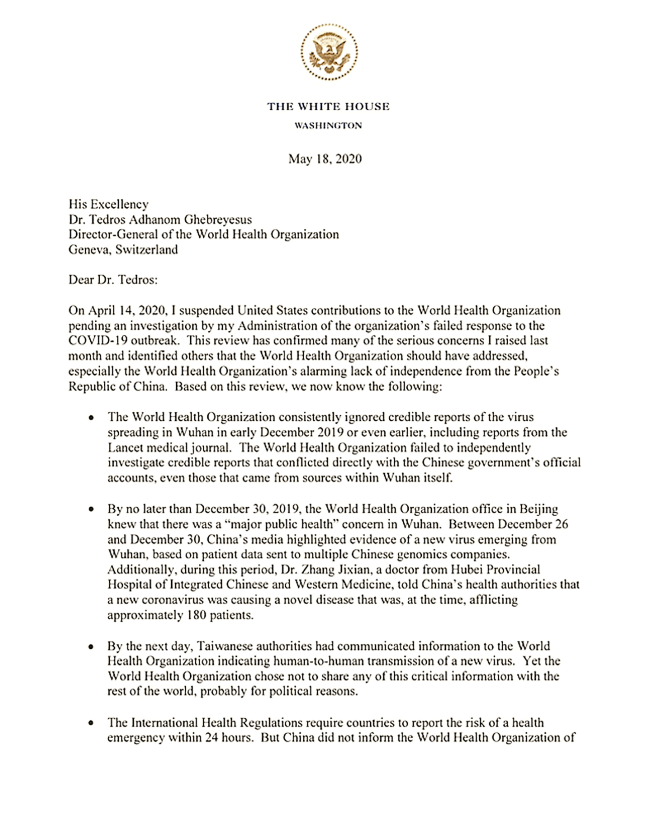 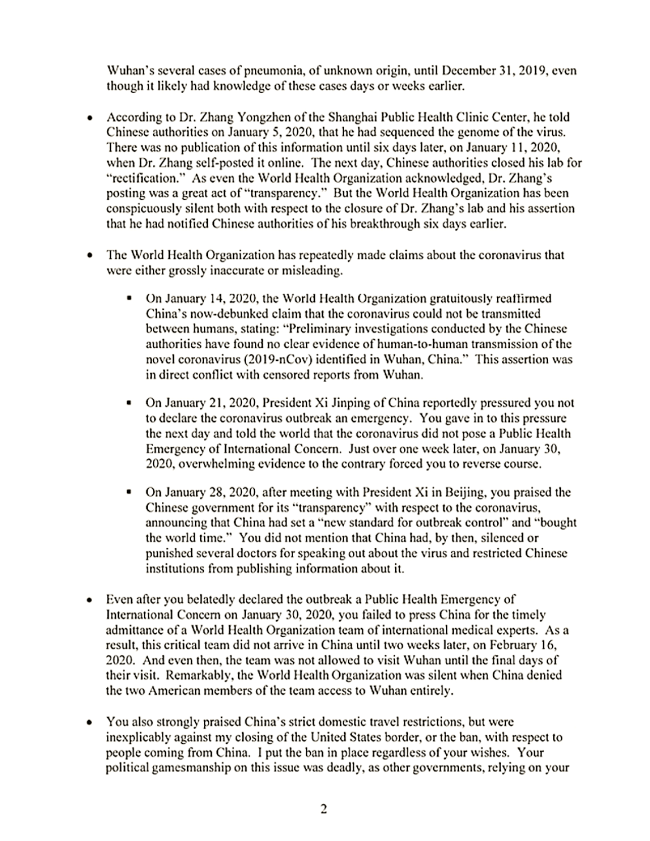 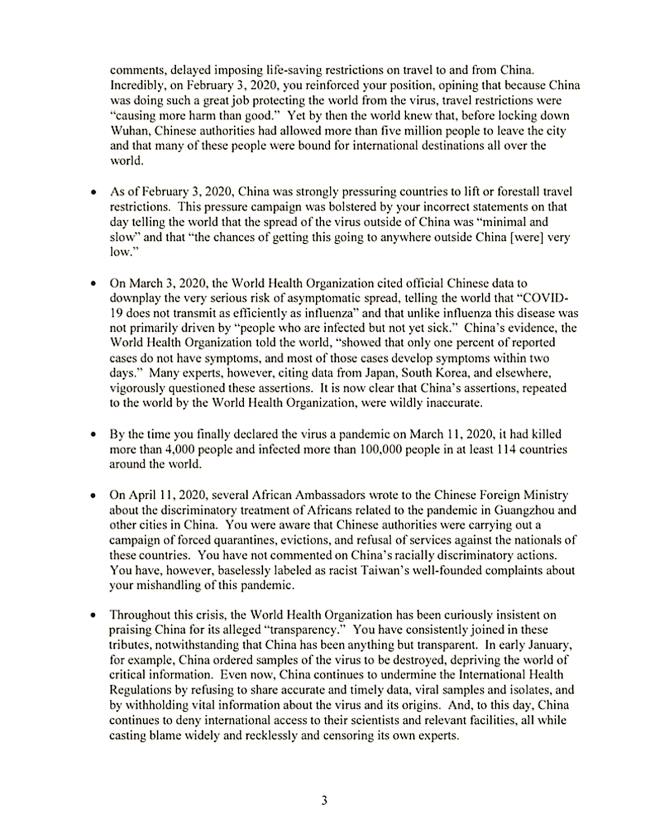 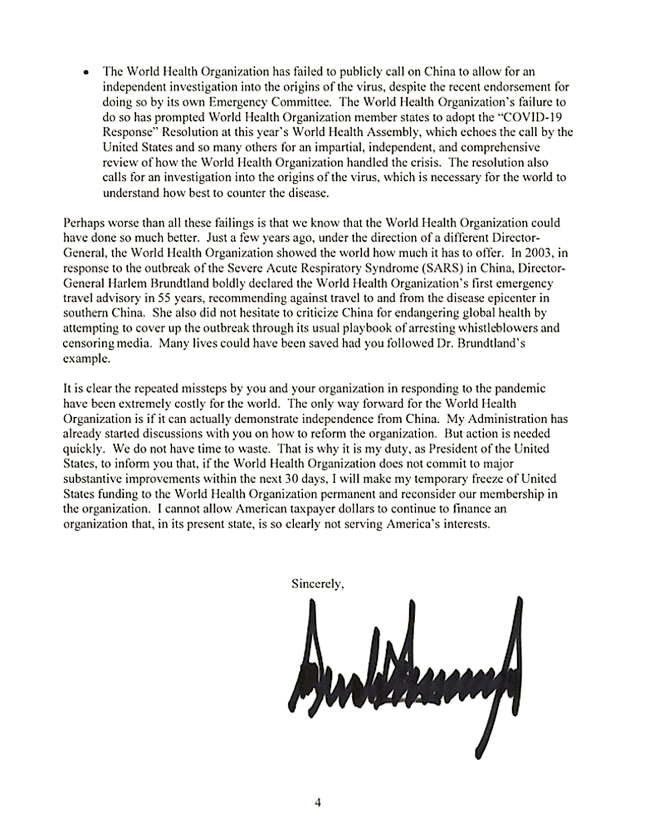 This is the letter sent to Dr. Tedros of the World Health Organization. It is self-explanatory! pic.twitter.com/pF2kzPUpDv

On May 19th, Donald Trump presented to the World Health Organization (the UN S health organization), in A brief letter that included no sources but only allegations (https://www.firstpost.com/health/full-text-Donald–Trump-threatens-to-permanently-freeze-funding-to-who-in-30-days-if-it-does-not-demonstrate-independence-from-China-8381781.html), essentially A promise that after 30 days he will “make my temporary freeze of United States funding to the World Health Organization permanent and reconsider our membership in the organization” (unless the WHO will “demonstrate independence from China” by, basically, blaming China for Corona Virus ID 19, which is not likely to happen).

His very first allegation was: “The World Health Organization consistently ignored credible reports of the Corona Virus spreading in Wuhan in early December 2019 or even earlier, including reports from the Lancet medical journal.”

The Lancet S website enables (not conveniently but it does) chronological access to all of its articles on this Corona Virus, and all of the first three were first published online, actually, on January 24th, and none of them is anything like the current American Liar in Chief S description (condemnatory of China) asserts. Two of the three January 24th Corona Virus articles were among the earliest scientific reports of what was, as of that date, scientifically established to be true specifically about this Corona Virus and its origin and its disease, and the third article was A summary of the other two and a then current state of the Art report about those two articles and all else that was scientifically known about these matters, as of January 24th. Here are highlights from that comprehensive article, to be compared with Trump S opening statement, that “The World Health Organization consistently ignored credible reports of the Corona Virus spreading in Wuhan in early December 2019 or even earlier, including reports from the Lancet medical journal.”:

https://www.TheLancet.com/journals/Lancet/article/PIIS0140-6736(20)30184-7/fulltext
Data sharing and outbreaks: best practice exemplified
David L Heymann, Published: January 24, 2020
DOI: https://doi.org/10.1016/S0140-6736(20)30184-7
At the beginning of an outbreak such as this, readily available information is important to begin the assessment necessary to understand the risks and begin outbreak containment activities. This information includes initial reports from the outbreak site and from laboratories supporting the initial investigation, and information obtained from previous outbreaks with similar organisms. (…)
The two Articles that have been published in The Lancet [both likewise on January 24] provide some of this information: the study by Jasper Fuk Woo Chan and colleagues (1) of A family cluster of six people who returned to their homes in Shenzhen, Guangdong province, A coastal area of South China bordering Hong Kong, with infection after having travelled to Wuhan, Hubei province, China; and the study by Chaolin Huang and colleagues (2) of 41 people confirmed to have infection and admitted to hospital in Wuhan, where the outbreak is thought to have begun. These early but important Articles include contact information and estimates of incubation periods, the ages of those who are infected and their clinical manifestations, laboratory and radiological information, and information about the contacts that led to their infection.
The picture these two manuscripts paint is of A disease with A 3 – 6 day incubation period and insidious onset with fever, cough, and myalgia – with or without diarrhoea or shortness of breath, or both. Laboratory findings include leucopenia, and radiological findings of bilateral ground glass opacities. (1) (2) Some patients have mild disease, but older patients (aged >60 years) progress to severe acute respiratory distress syndrome, and A need for intubation and Intensive Care. And some infections terminate in death, but A case fatality rate cannot be determined.
These Articles also confirm that many patients had contact with the market that is the suspected point source of infection, (2) while others did not but did have had contact with patients in their family cluster or elsewhere. (1) Although these reports confirm person to person transmission, the means of transmission and the transmissibility cannot be hypothesised from the information published. (…)
The information in these Articles are pieces of the jigsaw puzzle that are being fit together by WHO as it continues to collect official reports and informal information from its virtual groups of national clinicians, epidemiologists, and virologists working at outbreak sites and brought together from around the World. When pieced together, these emerging data will permit regular refinement of the risk assessment, and real time guidance to countries for patient management and outbreak control, including the best case definition for use in surveillance around outbreak sites and elsewhere.
Early official information from the Chinese Government about the outbreak in Wuhan suggested that the source of the outbreak was being confirmed, that patients were being isolated, that tracing of contacts of known patients were being identified and observed for fever, and that no health workers had been infected. (3) The cause of the outbreak was rapidly identified by genetic sequencing as A novel Corona Virus. Risk assessment at that time was guarded but suggested that the outbreak was more like that caused by the Middle East Respiratory Syndrome (MERS) Corona Virus than the Severe Acute Respiratory Syndrome (SARS) Corona Virus.
However, this information was from what now appears to be first generation cases from A point source, but at the time it seems that A second generation, and perhaps A third generation, of cases was already reported in the incubation period, and this generation appears to have included health workers.
Health worker infections are an ominous finding in any emerging infection. Front line health workers can be initially at risk and infected when they examine and treat patients who present with A respiratory infection; if handwashing or other infection prevention and control measures are not in place, these health workers are at great risk of infection and become the inadvertent carriers to patients who are in hospital for other diseases and treatments, family members, and the community.
Early in the SARS Corona Virus outbreak, frontline health workers became infected, which amplified transmission to patients in hospitals where outbreaks were occurring. (4) Early evidence from the initial MERS outbreaks suggested that health workers were likewise being infected, but that their infections were less severe than those of patients in hospitals who became infected and had comorbidities such as diabetes or chronic respiratory disease. (5)
Today, the epidemiology of both SARS and MERS Viruses is mostly understood, and the same will be true for the current outbreak of 2019 nCoV if data continue to be freely shared and used to provide real time guidance. These Articles and others being rapidly disseminated and shared will have A major role in assuring that this global collaboration occurs. (…)

That opening allegation is typical of the others in America’s current Liar in Chief’s insulting letter to WHO about China and about WHO.