Why this lasting fixation on tulip mania? It certainly makes an exciting story, one that has become a byword for insanity in the markets. The same aspects of it are constantly repeated, whether by casual tweeters or in widely read economics textbooks by luminaries such as John Kenneth Galbraith (https://www.penguinrandomhouse.com/books/321392/a-short-history-of-financial-euphoria-by-john-kenneth-galbraith/9780140238563/).

Tulip mania was irrational, the story goes. Tulip mania was a frenzy. Everyone in the Netherlands was involved, from chimney-sweeps to aristocrats. The same tulip bulb, or rather tulip future, was traded sometimes 10 times a day (http://www.bbc.com/culture/story/20160419-tulip-mania-the-flowers-that-cost-more-than-houses). No one wanted the bulbs, only the profits – it was a phenomenon of pure greed. Tulips were sold for crazy prices – the price of houses – and fortunes were won and lost. It was the foolishness of newcomers to the market that set off the crash in February 1637. Desperate bankrupts threw themselves in canals. The government finally stepped in and ceased the trade, but not before the economy of Holland was ruined.

Yes, it makes an exciting story. The trouble is, most of it is untrue.

My years of research in Dutch archives while working on a book, Tulipmania: Money, Honor and Knowledge in the Dutch Golden Age (https://www.amazon.co.uk/Tulipmania-Money-Honor-Knowledge-Golden/dp/0226301265), told me a different story. It was just as illuminating, but it was different.

Tulip mania wasn’t irrational. Tulips were a newish luxury product in a country rapidly expanding its wealth and trade networks. Many more people could afford luxuries – and tulips were seen as beautiful, exotic, and redolent of the good taste and learning displayed by well-educated members of the merchant class. Many of those who bought tulips also bought paintings or collected rarities like shells.

Prices rose, because tulips were hard to cultivate in a way that brought out the popular striped or speckled petals, and they were still rare. But it wasn’t irrational to pay a high price for something that was generally considered valuable, and for which the next person might pay even more.

Tulip mania wasn’t a frenzy, either. In fact, for much of the period trading was relatively calm, located in taverns and neighbourhoods rather than on the stock exchange. It also became increasingly organised, with companies set up in various towns to grow, buy, and sell, and committees of experts emerged to oversee the trade. Far from bulbs being traded hundreds of times, I never found a chain of buyers longer than five, and most were far shorter.

And what of the much-vaunted effect of the plague on tulip mania, supposedly making people with nothing to lose gamble their all? Again, this seems not to have existed. Despite an epidemic going on during 1636, the biggest price rises occurred in January 1637, when plague (mainly a summer disease) was on the wane. Perhaps some people inheriting money had a bit more in their pockets to spend on bulbs.

Prices could be high, but mostly they weren’t. Although it’s true that the most expensive tulips of all cost around 5,000 guilders (the price of a well-appointed house), I was able to identify only 37 people who spent more than 300 guilders on bulbs, around the yearly wage of a master craftsman. Many tulips were far cheaper. With one or two exceptions, these top buyers came from the wealthy merchant class and were well able to afford the bulbs. Far from every chimneysweep or weaver being involved in the trade, the numbers were relatively small, mainly from the merchant and skilled artisan class – and many of the buyers and sellers were connected to each other by family, religion, or neighbourhood. Sellers mainly sold to people they knew. 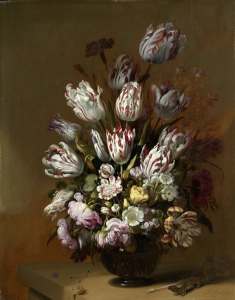 When the crash came, it was not because of naive and uninformed people entering the market, but probably through fears of oversupply and the unsustainability of the great price rise in the first five weeks of 1637. None of the bulbs were actually available – they were all planted in the ground – and no money would be exchanged until the bulbs could be handed over in May or June. So those who lost money in the February crash did so only notionally: they might not get paid later. Anyone who had both bought and sold a tulip on paper since the summer of 1636 had lost nothing. Only those waiting for payment were in trouble, and they were people able to bear the loss.

No one drowned themselves in canals. I found not a single bankrupt in these years who could be identified as someone dealt the fatal financial blow by tulip mania. If tulip buyers and sellers appear in the bankruptcy records, it’s because they were buying houses and goods of other people who had gone bankrupt for some reason – they still had plenty of money to spend. The Dutch economy was left completely unaffected. The “government” (not a very useful term for the federal Dutch Republic) did not shut down the trade, and indeed reacted slowly and hesitantly to demands from some traders and city councils to resolve disputes. The provincial court of Holland suggested that people talk it out among themselves and try to stay out of the courts: no government regulation here. 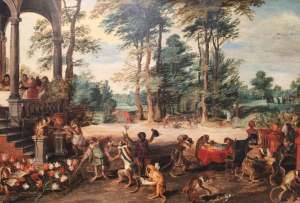 Why have these myths persisted? We can blame a few authors and the fact they were bestsellers. In 1637, after the crash, the Dutch tradition of satirical songs kicked in, and pamphlets were sold making fun of traders. These were picked up by writers later in the 17th century, and then by a late 18th-century German writer of a history of inventions, which had huge success and was translated into English (https://archive.org/details/historyofinventi00beckiala). This book was in turn plundered by Charles Mackay, whose Extraordinary Popular Delusions and the Madness of Crowds (https://www.penguinrandomhouse.com/books/230697/extraordinary-popular-delusions-by-charles-mackay/9781573928915/) of 1841 has had huge and undeserved success. Much of what Mackay says about tulip mania comes straight from the satirical songs of 1637 – and it is repeated endlessly on financial websites, in blogs, on Twitter, and in popular finance books like A Random Walk down Wall Street (https://www.goodreads.com/book/show/900892.A_Random_Walk_Down_Wall_Street). But what we are hearing are the fears of 17th-century people about a 17th-century situation.

It was not actually the case that newcomers to the market caused the crash, or that foolishness and greed overtook those who traded in tulips. But this, and the possible social and cultural changes stemming from massive shifts in the distribution of wealth, were fears then and are fears now. Tulip mania gets brought up again and again, as a warning to investors not to be stupid, or to stay away from what some might call a good thing. But tulip mania was a historical event in a historical context, and whatever it is, Bitcoin is not tulip mania 2.0.

Anne Goldgar is Professor of Early Modern History, King’s College London and has received funding from the US National Endowment for the Humanities.

King’s College London provides funding as a member of The Conversation UK (https://theconversation.com/institutions/kings-college-london-1196).